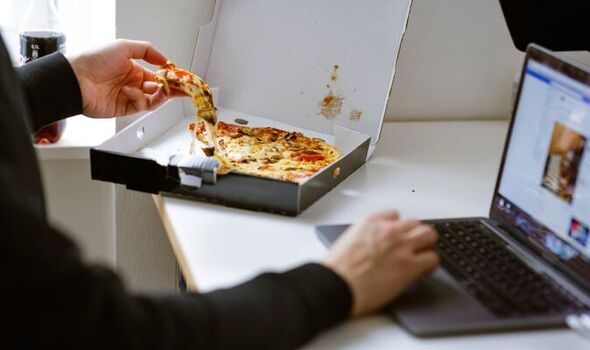 And other top devices getting in the way of mealtimes include games consoles and phone calls (both 15 percent).

But a third (33 percent) don’t enjoy eating by themselves, and almost half (47 percent) wish they could dine and share food with loved ones more often than they currently do.

Rachel Cranston, spokeswoman for Pukka, which has launched its “Just for Two” pie range, said: “We know dinner time can often be full of distractions.

“It’s no surprise that making the time to share meals with friends, family, or workmates can be tricky – particularly as nearly half of the nation doesn’t consider sitting down to a meal with someone as part of their daily routine, despite wanting to.

“We wanted to take action and help people to make everyday mealtimes more special – by encouraging the nation to spend time together, just because.”

The aspect that people most enjoy when it comes to sharing a meal is not the food itself, but the human interactions which come with it, the study found.

The research found the most enjoyable parts of sharing food include conversation (37 percent), good company (34 percent), and having a chance to catch-up with family (31 percent) – all described as having the ability to bring people closer (30 percent).

Dinner was the most common meal to enjoy with others – with the most popular foods to share including a Sunday roast (22 percent), pizza (15 percent), a Chinese takeaway (15 percent), and almost one in ten enjoying sharing pies.

As the cost-of-living crisis continues, 35 percent will have more meals with friends and family in the coming months.

This is because it can save money, and they value the thought of having a nice conversation over the food.

But currently only half of adults eat together with their partner, and a mere one in five (21 percent) eat with their colleagues – making for a lonely lunch break.

But a third (33 percent) of those polled, via OnePoll, don’t enjoy eating by themselves – and more than half (52 percent) think they prepare better meals when they are cooking for someone else.

Rachel Cranston, for Pukka, added: “It’s now more important than ever to bring people together, and it’s clear that sharing food does just that.

“Let’s claim back those everyday sharing experiences and make mid-week meals come alive again, without letting the little things in life distract us.

“So, set time aside, lock your phones and games consoles away, and make mealtimes more special.”

What Is Carpaccio and How Do You Make It?