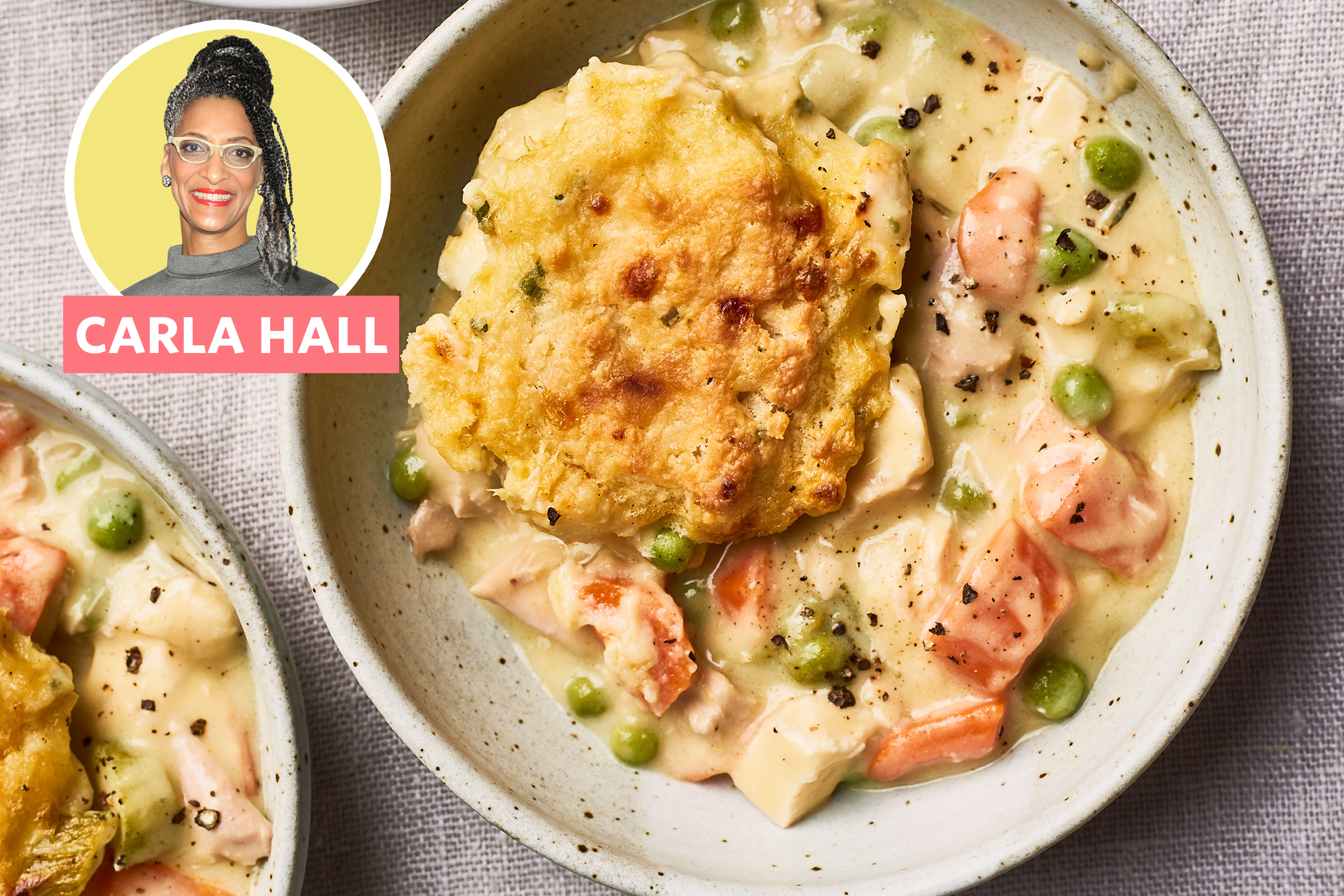 Tasked with testing beloved celebrity-penned pot pie recipes, I knew we had to include Carla Hall’s version. The Top Chef competitor and former host of The Chew is a vivacious champion of soul food, so I knew she’d add some of that Southern flavor to the classic dish.

Pot pie is an American staple, and I have opinions about what it should be. Excitement mounted as I skimmed Carla’s recipe and saw that it checked the boxes one by one: chunks of classic veggies, fresh herbs, hearty pieces of chicken, and a buttery bread topping. Carla is a Nashville native, and upgrades the standard pie crust for cheddar-chive drop biscuits. I headed to the kitchen to find out where Carla Hall’s chicken pot pie ranks among among the rest.

You’ll sauté large pieces of onion, carrot, and celery with fresh sprigs of thyme, rosemary, and sage in a large cast iron skillet — and pull and chop the meat from a roasted chicken. (Carla gives the green light to use a rotisserie chicken, so I did.)

Once the vegetables are tender, pluck out the herb stems and add the butter and flour. Cook the flour for a minute to get rid of the raw flavor, then whisk in the chicken broth. Add a bay leaf and a dose of heavy cream. Bring the gravy to a boil, then drop the heat to maintain a simmer. Stir in defrosted frozen peas and the chopped chicken, and simmer until thick and creamy. (Side note: Carla didn’t mention this in the recipe, but I removed the bay leaf at this point.)

Instead of a pie crust, Carla’s pie is topped with a drop biscuit. You’ll work cubes of cold butter into the dry ingredients, toss in cheddar and chives, then incorporate the dairy. Instead of using buttermilk, Carla mixes plain (not Greek) yogurt and milk together (I used whole milk). You’ll make well in the center of the flour and pour in the yogurt mixture. Stir with a wooden spoon, adding more flour if necessary (more on this later!).

You’ll drop spoonfuls of this biscuit dough into some additional flour, then arrange them on top of the pot pie. At this point, the skillet was very full, to the point of overflowing, so I set the skillet on top of a parchment-lined baking sheet to catch the inevitable drips to come. Bake until the biscuits are golden and the filling bubbles. Once out of the oven, dot the top of each biscuit with a small pat of butter. 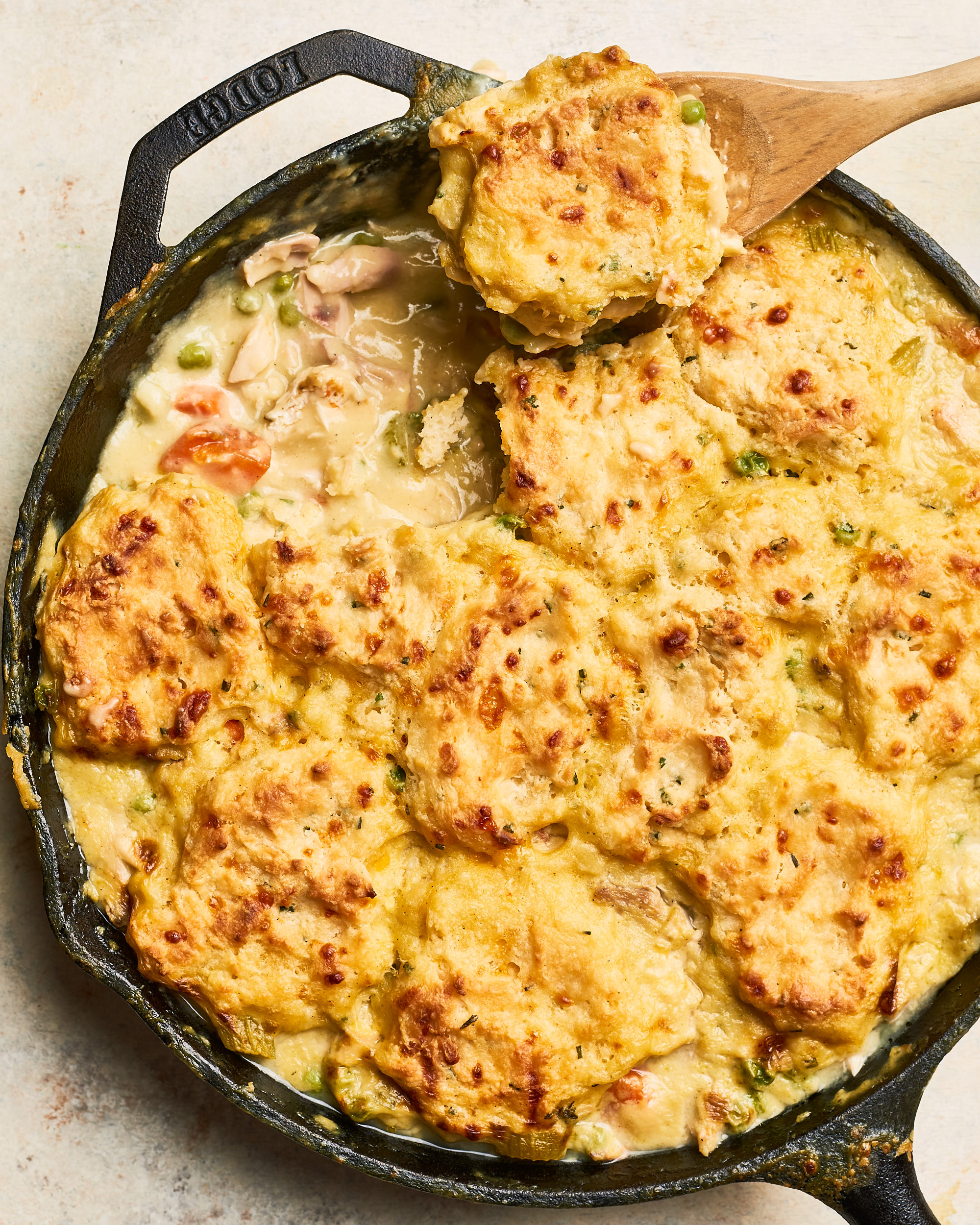 What I Thought of Carla Hall’s Chicken Pot Pie

Now this is what I’m talking about! Of all of the pot pies I tasted, this pie has everything I’m looking for. Large chunks of chicken, generous pieces of vegetables (the classic trio of onion, carrot, and celery), and a savory bread topping that soaks up the gravy below. The herbs are impossibly fragrant while they sauté with the vegetables, and I love Carla’s use of the whole sprig. You get all of the flavor with none of the tedious prep work (picking thyme leaves is my least favorite kitchen task). It’s easy to pull the spent stems from the gravy before finishing the pie. The pie bakes in the same skillet as you sauté, so the browned bits of flavor developed stay in the sauce and aren’t lost, which can happen when you transfer the stew to a separate baking dish.

While a pie crust is classic, I loved Carla’s cheesy herbed biscuit topping. Yes, making a biscuit takes more effort than unrolling a refrigerated pie crust, but the cheddar-chive payoff is worth it. A watch out, though: I had to add an additional cup of flour (for a total of 3 cups) to the biscuit mixture because the consistency was more batter-like than dough-like. Carla instructs you to add more flour, as if she knew the 2 cups wouldn’t suffice, but doesn’t give any indicators on the consistency you’re looking for.

The other hurdle with the biscuits was that she didn’t indicate how many biscuits to scoop. This information is necessary in order to evenly space the biscuits in the gravy. I set the biscuits on a parchment-lined baking sheet until all of the dough was gone instead of placing the dredged biscuits directly into the skillet. I used an ice cream scoop to get 15 similarly sized biscuits. The biscuits could easily be made ahead and refrigerated, making topping the pot pie as easy as… pie. The browned top is firm, in contrast to the tender underside that bakes in the gravy. A final pat of butter adds some shine to the top before serving. 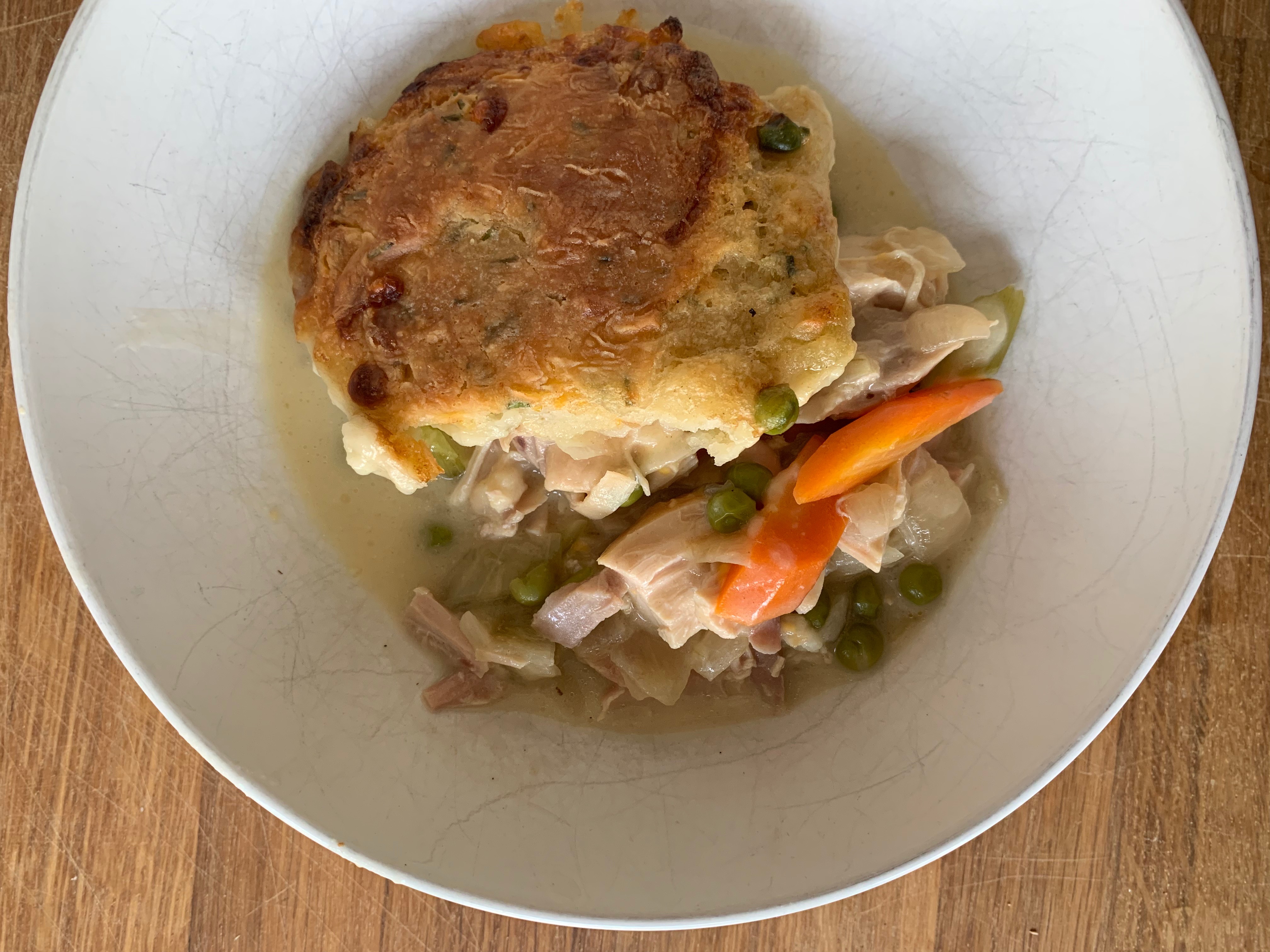 1. Reduce the stock. I cooked the filling for twice as long as Carla suggests (20 minutes instead of 10), and still thought that the gravy was thin upon serving. Instead, reduce the chicken broth from the start (maybe the skillet won’t overflow this time!), and use 4 cups instead of 6. Keep an extra cup of broth nearby to stir in at the last minute if the gravy appears too thick.

2. Adjust the flour in the biscuit dough. The biscuit mixture was very loose and almost soupy. I added an extra 1 cup of flour for a soft drop-able consistency.

This is everything I’m looking for in a pot pie: an indulgent dinner with hearty chunks of chicken and vegetables simmered with fresh herbs and baked under a cover of cheddar chive biscuits. With the small tweaks to the biscuits and an adjustment to the amount of broth, this pie comes very close to receiving full marks. This chicken pot pie has absolutely earned a spot in my dinner rotation.

The Indonesian Condiment You’ll Want to Put on Everything