Cinnamon rolls are available from cafes and restaurants once again in the UK following months of lockdown. The Government has allowed eateries to open their doors for dining in, and people can get a hefty discount on items thanks to the Eat Out to Help Out scheme. But people may prefer to continue making food at home, as many will have discovered a newfound love of cooking during the lockdown.

How to make a cinnamon roll

Cinnamon rolls may seem complicated due to their spiral design, but they are deceptively easy to make.

They’re not healthy, however, as they come with a dose of vanilla icing and brown sugar intermingled with pastry.

But everyone deserves to treat themselves now and again, so Express.co.uk has compiled the following recipe from BBC Good Food and takes one hour and 35 minutes to make. 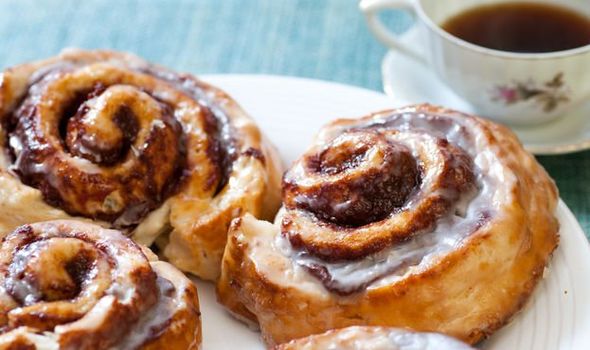 Heat the oven to 180C with a fan, or 160C to gas four and grease a loose-bottomed cake tin before lining it with baking parchment.

Mix the flour, caster sugar and cinnamon in a bowl with a pinch of salt, and combine with whisked butter, egg yolks and milk from another bowl.

Sprinkle flour over a level countertop and roll out the pastry into a 30 by 25cm square.

Then mix together the filling ingredients, spread it evenly over the dough and roll lengthways into a log.

Cut the dough evenly into eight pieces and pack them into the cake tin, before brushing the surface with a thin layer of milk.

Put them in the oven and bake them for 30 to 35 minutes until golden brown, and cool them for five minutes before removing from the tin once done.

Take a large bowl and sift in the icing sugar with a well in the centre where the cream cheese and butter will go with two tablespoons of boiling water and stir to mix them in.

Add some more water, some vanilla essence and stir until a drizzly consistency, and slather the mix over the completed rolls.

5 Delicious Ways to Use Up a Mealy, Not-Great Watermelon