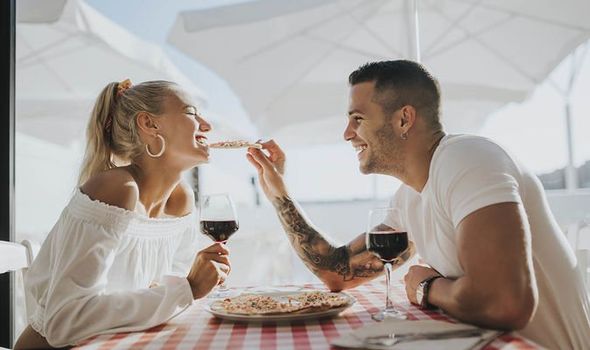 A third also said knowing someone is a good cook is a turn on. With 29 percent agreeing a first date should always include food, ideal set ups were found to be dining out (65 percent), going to a food market (27 percent) and exploring food festivals (25 percent).

But mussels, ribs and lobster are also among the dishes Brits would avoid on a first date, while pizza (39 percent), steak (37 percent) and a roast dinner (35 percent) are the go-to safe dishes.

The study was commissioned by European bakery experts St Pierre and found it typically takes four dates before eating breakfast and tucking into “risky” foods with someone are seen as “acceptable”.

But of those who have gone for an early morning date, 23 percent think going for brunch helps keep the atmosphere relaxed and casual while a tenth believe it’s more romantic than any other meal.

It also emerged the preferred meal for a marriage proposal is steak (24 percent), while meeting the in-laws should be paired with a roast dinner (45 percent).

Pizza is the go-to for the first meal in a new home (35 percent), when bringing a new-born baby home (24 percent) and going through a breakup (17 percent).

Paul Baker, the founder at St Pierre Bakery, said: “The research proves just how important food is to making connections in our personal life – whether it’s starting out in a new relationship or other events later in life.

“Food gives people something to talk about on a date, to try different dishes and discuss their culinary preferences – which can clearly be make or break when it comes to a potential partner.

“Breakfast and brunch as an occasion to catch up with friends, dates and family has grown in popularity over the years and it seems some would now prefer this to a more formal evening meal.

“The stats also showed that virtual food-based dates have been popular during lockdown, with more than a third cooking together on a video call and more than half eating together, virtually, to keep dating fun.”

The study also found it takes five weeks of knowing someone before it’s seen as ‘acceptable’ to steal food off their plate and 24 percent would be annoyed if someone tried this on a first meeting.

It takes six weeks before Brits will be honest with someone about their cooking and if a fairly new date dished up a meal which they didn’t like, 36 percent wouldn’t admit it.

A sixth of those polled via OnePoll even admitted to judging a date by the food they ordered.

And two in five have also assessed a date on the way they eat, such as chewing loudly, while a fifth would judge someone if they asked for a “doggy bag” for leftovers.

Paul added: “Great food is a joy to be shared. It’s about making memories, which is why it’s so important in key life events.

“Everyone remembers what they ate on their wedding day, or the first meal they had with prospective in-laws!

“St Pierre is all about elevating the everyday, so whatever the occasion, you can make it magnifique.”

Let us guess the stage of your relationship with this foodie quiz.

This Easy, 4-Ingredient Hot Fudge Sauce Is Such an Excellent Summer Party Trick