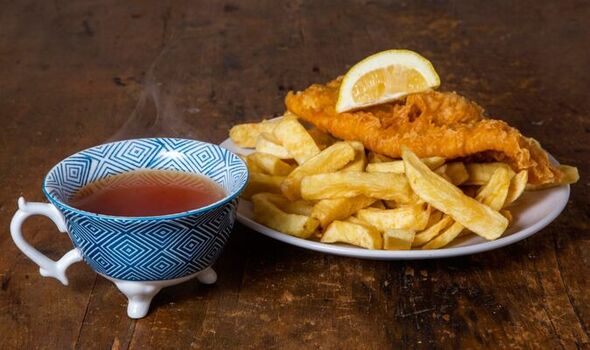 She advised lemon drizzle cake can be harmoniously matched with an Earl Grey as their citrus characters complement one another, while green tea combines well with spicy foods because of its refreshing and cleansing texture.

The pairings come as a survey of 2,000 tea drinkers delved into tea habits across the UK, finding as many as one in five would have a brew with quintessentially British meals like sausage and mash or a jacket potato – and a third love a cuppa with their fish and chips.

The research, commissioned by Clipper, also discovered Brits’ more surprising food pairings – finding one in ten would drink an Earl Grey with a curry, and a quarter would accompany one with a pasty.

For adventurous Brits looking for new tea pairings, Angela went on to say green tea with lemon infusions can add flavour to smoked salmon, while Rooibos is best served with cashew nut or coconut-based food.

Angela Pryce, who partnered with Clipper, said: “It’s fantastic to see Brits’ more interesting tea combinations – there really are so many great ways to pair tea with food.

“Camomile can be enjoyed any time of day or night, as it is naturally caffeine-free.

“This will work best paired with lighter foods – an egg custard tart sprinkled with a dusting of nutmeg would work a treat.

“For a playful combination, try a gingernut biscuit with a peppermint herbal infusion. The fiery heat of the biscuit works in absolute contrast to the pure coolness of the mint – tongue-tingling magic.”

According to the survey, almost a quarter of adults like to be adventurous with different flavours of tea.

Breakfast came out on top as the most popular meal to have with a brew – but over half (56 percent) also have a cuppa with their lunch, and 63 percent with dinner.

And when choosing tea, taste was seen as the most important factor according to 87 percent of UK tea drinkers – with one in six adding that having a cup of tea is the highlight of their day.

Bryan Martins, spokesman for Clipper Tea, added: “We’re a nation of tea lovers and foodies, and we love exploring how tea can be paired with our favourite meals, as well as the dishes people are already enjoying with their daily brew.

“It’s clear that great tasting tea complements any meal and is the number one factor for people when choosing the perfect blend.

“There are so many tea varieties with distinctive tasting notes and aromas – a delicious cuppa can really make it better.”

The survey, carried out via OnePoll, also saw English breakfast crowned the most popular tea flavour, followed by Earl Grey, green tea and a peppermint infusion.

And two-thirds agree tea is the most comforting drink, with a further six in ten admitting a brew was able to get them through the winter blues.

This comes following the recent launch of Clipper Teas latest consumer campaign, which saw it challenge people to “Make it Better” and not settle, especially when it comes to tea – whatever it’s paired with.