James Martin hosts his self-titled cooking show on ITV every Saturday morning. Today, after showing viewers how to make a smoked haddock soufflé, the chef demonstrated a quick and easy way to cook Welsh rarebit.

Welsh rarebit is essentially cheese on toast but with added flavour – a perfect snack or lunchtime meal to eat on the Easter weekend.

Penny from Bingley in Yorkshire called in to James’ show today to tell the chef about her struggles with cooking rarebit, saying that she “cannot keep the cheese on top of the bread”.

James, as always, had all the answers and showed Penny how he would make the delicious dish. 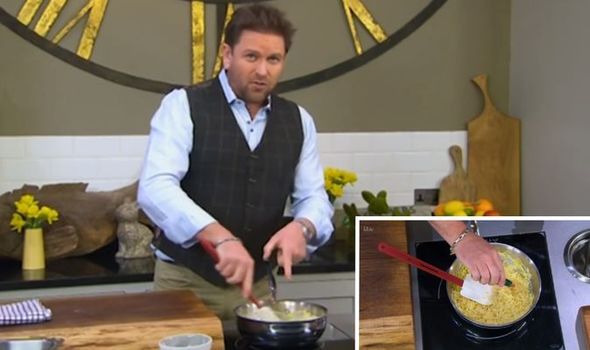 James poured “a touch of” beer in a pan that was already on the hob.

Then, he added the grated cheddar cheese.

The chef started to mix the beer and cheese together with a large plastic spatula before adding a little milk to the mixture.

James said that around 60ml of milk is sufficient.

DON’T MISS:
The FIVE surfaces to avoid with baking soda [INSIGHT]
How to stop litter tray smelling: Is baking soda safe in litter trays [ANALYSIS]
How to clean marks off induction hob – why NOT to use baking soda [EXPLAINED]

The chef explained that the pan needed to be on a medium heat throughout the cooking process.

He then added a little Tabasco and the English mustard to the mixture.

James mixed everything together, thickening the cheese sauce, before adding a small amount of flour.

A tablespoon of flour is enough, according to James. 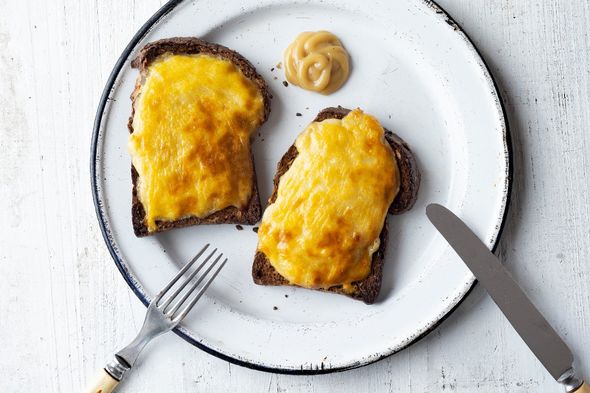 One of the most important things to remember while cooking the rarebit is not to overcook it, James said.

The chef then added an egg yolk to the mixture, which would enrich it and help it turn brown when put under the grill.

After ensuring that the sauce had been properly mixed and the cheese had completely melted, James put the mixture in a tray and let it spread out to all its corners.

He explained that you can cut the rarebit into square pieces and leave it in the fridge for a week.

Then, when you want to eat it, the rarebit can be taken out and put underneath the grill to melt.

It is best served on bread or toast.

According to historians, rarebit dates back to the eighteenth century and was first called “Welsh rabbit”.

In his book Alphabet Juice, which is about the origin of words, author Roy Blount Jr. said that this is due to the idea that “the closest thing to rabbit the Welsh could afford was melted cheese on toast”.