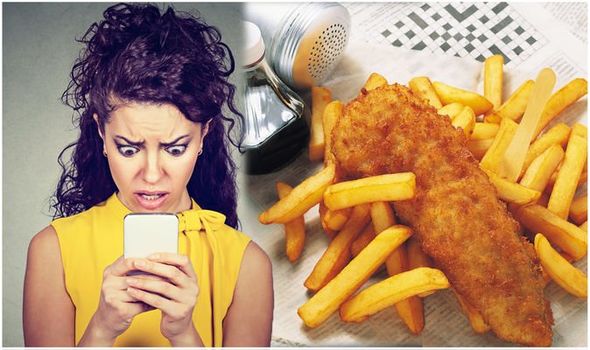 Top food critics have been left baffled after a man made a bizarre claim about fish and chips.  A single comment left under a restaurant review of a Cumbria chip shop has left people flummoxed about the correct way to devour the nation’s favourite Friday dish.

Grace Dent, who has a restaurant column in the Guardian and regularly appears on Masterchef, shared a man’s response to her latest food review on Twitter.

The food critic asked her followers for reassurance after a man shared his bizarre theory about batter following her review of Angel Lane Chippie in Penrith, Cumbria.

Grace praised the fish shop for its “curly, firm fleshed” fish, which she pointed out is always “clogged” with extra globs of thick batter.”

But one reader had a totally different opinion to batter in general, and has thrown social media into a frenzy. 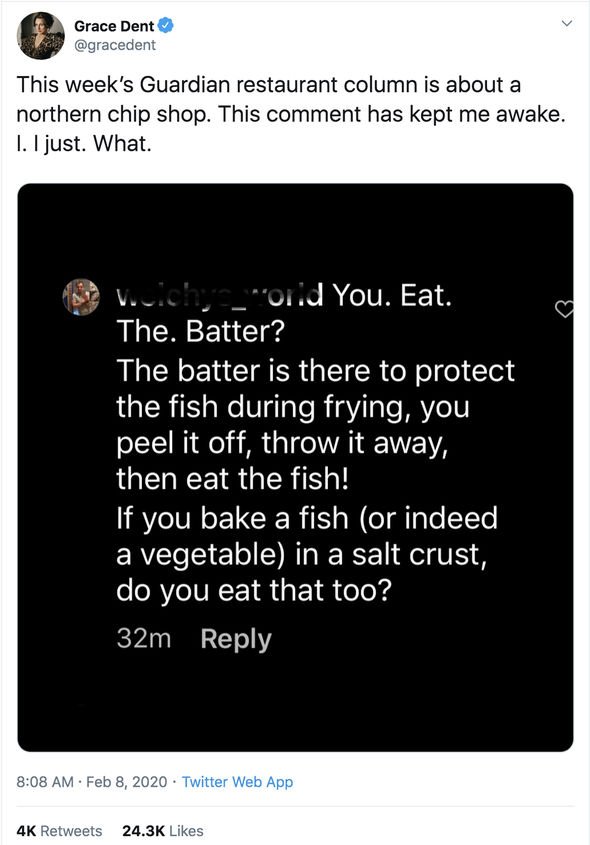 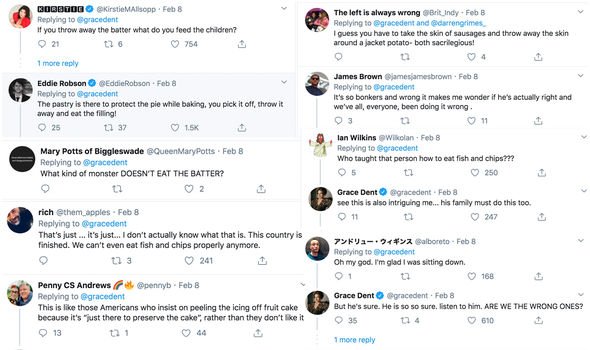 Responding to her praise the man claimed: “The batter is there to protect the fish during frying, you peel it off, throw it away, then eat the fish!

“If you bake a fish (or indeed a vegetable) in a salt crust, do you eat that too?”

Masterchef regular Grace took to Twitter saying: “This week’s Guardian column is about a northern chip shop. This comment has kept me awake. I. I just. What.”

Hundreds of others were quick to rush in to correct the wild assertion.

Another person added: “I guess you have to take the skin of sausages and throw away the skin around a jacket potato- both sacrilegious!”

And second added: “It’s so bonkers and wrong it makes me wonder if he’s actually right and we’ve all, everyone, been doing it wrong.”

A third also commented: “That’s just … it’s just… I don’t actually know what that is. This country is finished. We can’t even eat fish and chips properly anymore.”

While a fourth commented: “This is like those Americans who insist on peeling the icing off fruit cake because it’s ‘just there to preserve the cake’, rather than [say] they don’t like it.”

British comedy and science fiction writer also joined the conversation commenting: “The pastry is there to protect the pie while baking, you pick it off, throw it away and eat the filling!”

And while the majority were in a state of confusion over the claims, Grace had her doubts.

But others pointed out that the man’s assertion was deep rooted in history and that over time the batter has become part of the meal. 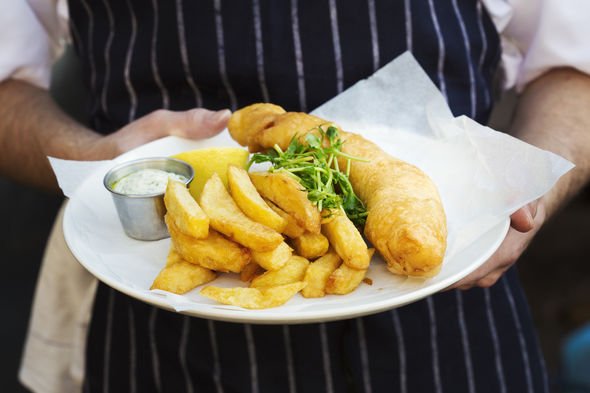 One social media user wrote: “I think that is the origin of battered fish. The batter was just a cooking method, like a salt crust. Now it’s become an integral part of the meal.”

Despite the man’s bold assertion, there is little evidence to back up his claim, which has proved unpopular with chip shop fans and chefs alike.

Andrew Crook, President of the National Federation of Fish Friers, told Fabulous Digital that batter should be left on.

He said: “Modern batters are delicious and crisp with a great crunch when you eat them with lovely white steamed fish inside, it’s the combination of taste of the batter and fish bursting through that makes the dish so special.

“Batter came from a practice of baking fish in a salty dough to steam the fish inside historically, but by the time fish and paired with chips in 1860 it had become an edible batter.”