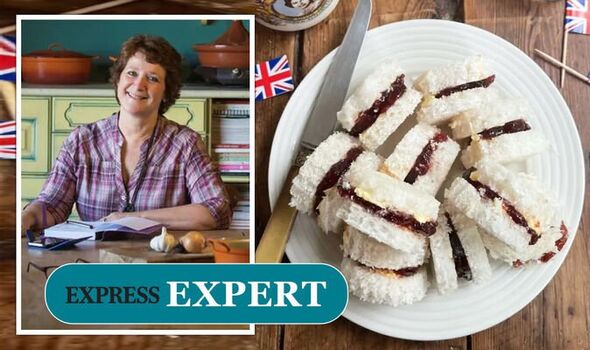 These jam penny sandwiches are perfect for any tea party taking place across the UK this Jubilee. They are also great to make with children who will delight in this sweet treat. These “Pennies” were devised by Karen Burns-Booth, the baker behind Lavender and Lovage. She is also the author of the cookbook Lavender & Lovage: A Culinary Notebook of Memories & Recipes From Home & Abroad.

Karen said: “Jam Pennies are famously attributed to Her Majesty the Queen, as one of her favourite afternoon tea sandwiches, along with The Queen’s Chocolate Biscuit Cake.

“Jam sandwiches are a British tea time (or supper) tradition – and I remember my mum and my grandmother making a round of jam butties, as we called them, when we got home from school, to fill the gap between homecoming and tea.

“In the past, when I have made these jam sandwiches for Maundy Thursday, I have used a seven-grain sliced bread, but any good quality sliced bread works well, as long as it’s not too thick.”

Find the recipe for these adorable snacks below.

Use good bread and homemade or high fruit content jam.

Use plant-based spread for a veggie and vegan version.

Raspberry and Strawberry jam is traditional for these sandwiches, but use any berry jam or fruit curd you have to hand.

Can be made ahead of time, cover with cling-film, or a damp tea towel to stop them from going hard. and curling around the edges.

Great for picnics and the school lunchbox.

For those with more of a savoury tooth, Karen shared a recipe for cheesy sausage rolls.

The Cheesy Ploughman’s Sausage Rolls are made with pork sausages, onion, cheese and chutney.

“They aren’t pretty, but they are utterly delectable!”