If the last chicken pot pie you ate came from a little green box in the freezer section, you’ve been missing out on arguably the most classic — and most indulgent — of chicken dinners. Finding the right balance of chicken and vegetables and getting the gravy and buttery bread topping just right can be an all-day affair. So if you’re heading into the kitchen, it’s important to choose the right recipe.

This month I cooked four of the most popular chicken pot pies on the internet, including a recommendation from you, our Kitchn readers! One pie was made completely from scratch, another took several supermarket shortcuts, and the others fell somewhere in between. Here are the chicken pot pie picks, ranked from my least to most favorite. 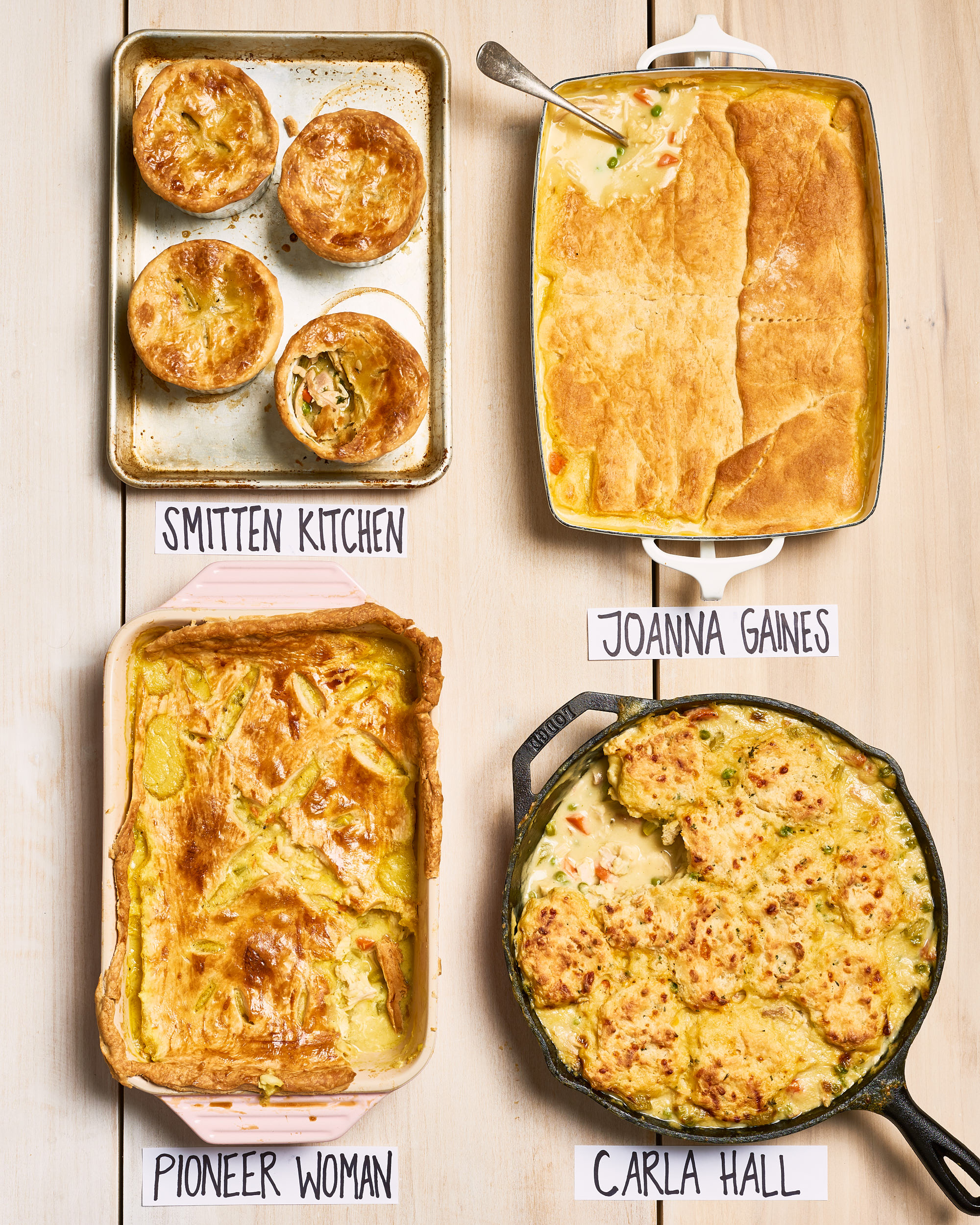 If your idea of pot pie involves a lunch tray and the signature flavor of cream of chicken soup, this cafeteria-style recipe is for you. This Gaines’ family recipe relies on supermarket shortcuts — like condensed cream of chicken soup, rotisserie chicken, and refrigerated crescent roll dough — so it gets points for ease. But there are some technical issues with the recipe that unfortunately sideline the whole thing.

It’s no surprise that Ree Drummond delivers a solid recipe for a comfort-food staple like chicken pot pie. With her friendly encouragement (“Do you have fresh roasted, rotisserie chicken, or even leftover turkey? You can make this pie!”), this homestyle pie is complete with a crisp crust atop tender chicken and vegetables coated in a brothy gravy. Beginner cooks will like that this recipe has no tricky techniques, while those in need of a midweek meal can use up leftover chicken and that roll of refrigerated pie crust.

Kitchn readers named Deb Perelman’s — aka Smitten Kitchen’s — chicken pot pie as one of their all-time favorite recipes. These individual chicken pot pies (adapted from an Ina Garten recipe) take most of a day to prepare: cooking the chicken, making the gravy, and rolling the pie crust all from scratch. Simply said, this pie takes no shortcuts on the road to dinner. The result? An undeniably classic rendition of chicken pot pie with a particularly standout pie crust that makes all the effort worth it.

Each spoonful of Carla Hall’s rendition delivers deeply satisfying bites of tender chicken and hearty pieces of vegetables coated in a creamy herb-infused gravy. This soul-satisfying pot pie is finished with a blanket of not-to-be-missed cheddar and chive drop biscuits that plump in the gravy below. Although this recipe does require a few small adjustments to get the biscuits just right, it wins the highest marks for flavor all around. 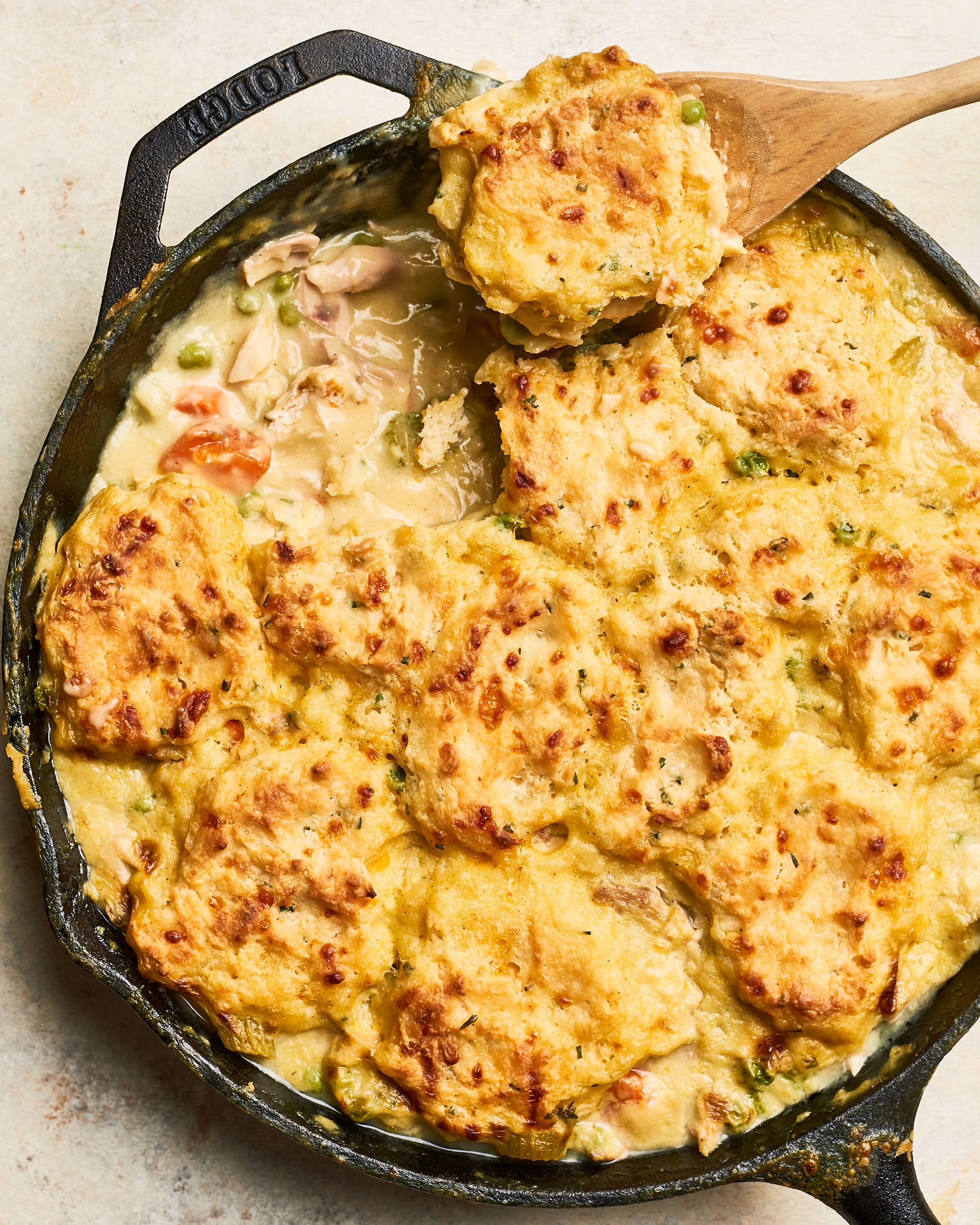 The Big Takeaway Lessons from All Four

1. Don’t skimp on the filling. Chicken pot pie is the quintessential one-dish dinner, providing protein, veggies, and comforting carbs all on a single plate. I found myself unsatisfied each time a recipe called for a fine dice (or even neglecting vegetables all together). For the most filling forkfuls, leave the meat and vegetables big enough to satisfy hearty appetites.

2. Finish the pie with a homemade topping. The topping is what makes pot pies special. The top two choices in this battle each had a homemade finishing touch, so whether you finish the filling with a drop biscuit or pie crust, make it yourself. Pressed for time during the week? Prepare the biscuits or crust ahead of time and refrigerate (or freeze) until it is time to bake.

3. Cool the pot pie before serving. It’s tempting to serve a steaming-hot pot pie, but give the pot pie at least 15 minutes to cool before serving. The gravy thickens as it cools, giving the filling a creamier consistency then if served straight from the oven.

What’s your absolute favorite chicken pot pie recipe? Tell us in the comments below.

Everything We Know About the Return of Popeyes' Chicken Sandwich

108-Year-Old Says Champagne Is the Secret to Her Longevity