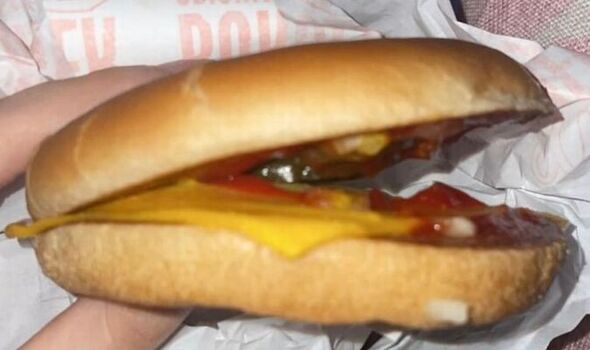 A woman says she was left hungry and let down after ordering a late-night cheeseburger from McDonald’s.

She claims she ordered the £1.19 snack online on October 11, but was devastated upon learning the restaurant had “messed” up her order.

The student, who had been looking forward to her burger, was furious, branding the south London branch as “rubbish”, reports My London.

The apparent mistake was allegedly made by workers at the Sutton McDonald’s, Oldfields Road, where, instead of a typical burger, she claims she received just melted cheese, pickles, and ketchup inside a bun.

She says the takeaway had forgotten to put the burger inside of her bread and claims it was not the first time she had been disappointed by the same branch.

Taking to social media, the woman said: “McDonald’s on the A217 is actually a joke and wouldn’t bother going there.

“Ordered food and they fully just gave me a bun with cheese, ketchup and pickle.

“Like, not being funny, but I wanted a burger not a sandwich.

“Place is an absolute joke.”

After complaining about the mishap to a local community group, other customers also criticised the Sutton Mcdonald’s.

One person, who was not shocked by the missing burger, had also had a bad experience at the takeaway recently and said: “It happens all the time with them [McDonald’s Sutton] and they don’t give a damn.

“They’re always missing items, not getting burgers in the buns, how do they get away with it?”

Another added: “That’s the worst McDonald’s ever … I haven’t seen such a bad service anywhere.”

The woman who claims she received the burger less bun replied to the other user and said: “They are rubbish there, always get the orders wrong, cold food and apparently forget to put burgers in the burgers.”

On the other hand, some did see the funny side. “As a vegetarian, I would really enjoy this,” a commenter joked.

“Gotta admit it’s a bit funny though”, another added.