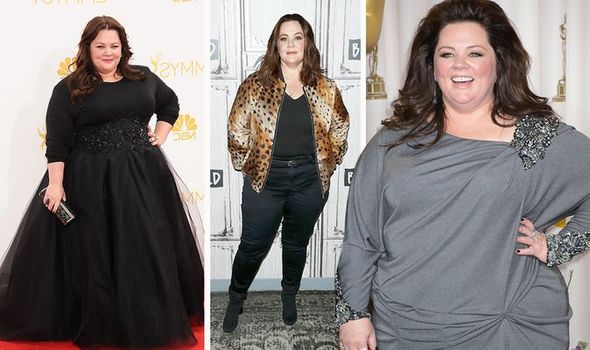 Melissa McCarthy is best known for her roles in Gilmore Girls, Mike & Molly, movies suchb as Bridesmaids, The Heat, Spy and Identity Theif. The American actress is also the recipient of numerous accolades, including two Primetime Emmy Awards and nominations for two Academy Awards and two Golden Globe Awards. Having been in Hollywood limelight for many decades, Melissa has battled with her weight and self-esteem. At one point, she lost 5 stone. Here’s how she did it.

In an interview with The Rolling Stones, Melissa spoke about the first time she remembers thinking about her weight.

She said: “I do think I worried about weight too soon, when it was only little-kid weight.

“I thought I battled weight throughout high school, but I look back at pictures of me as a cheerleader, doing sprints, lifting weights, doing gymnastics, playing tennis.

“And while I wasn’t reed-thin like some girls … I was a size six the entire time. So what on Earth was I freaking out about?

“I’ve been every size in the world,” she adde. “Parts of my twenties, I was in great shape, but I didn’t appreciate it. If I was a six or an eight, I thought, ‘Why aren’t I a two or a four?’”

Melissa moved to LA  and as a result of eating unhealthy and not exercising she gained 1.7 stone (25lbs).

In order to lose the weight quickly, the actress went on an all-liquid diet that allowed her just 500 calories a day for about four months when she starred on Gilmore Girls.

Although the diet was approved by her doctor – and it resulted in a five stone weight loss – she told said she would never do something as drastic again because it made her feel, “starved and crazy half the time”.

In 2016, Melissa revealed her weight loss “secret”, she told Extra: “No trick, nothing to tell, just super boring life.

The actress has never been about reaching a certain number on the scales.

She told Refinery29: “I have [lost weight], but I’ll be back again.

“I’ll be up, I’ll be down, probably for the rest of my life.

“The thing is, if that is the most interesting thing about me, I need to go have a lavender farm in Minnesota and give this up. There has to be something more.”

Melissa also revealed her mindset towards her weight has changed.

She told CBS This Morning: “I finally said, ‘Oh for God sakes, stop worrying about it,’ and it may be the best thing I’ve ever done.

“I truly stopped worrying about it. I stopped over-analysing, over-thinking, over-doing anything… I just stopped constantly being worried about it and I think there’s something to kinda loosening up and not being so nervous and rigid about it that, bizarrely, has worked.”

Over the years, there have been reports Melissa has followed a keto diet.

A keto diet comprises of high protein and fats with low amounts of carbs per meal.

In terms of what exercise Melissa does, she explained she is “wildly healthy” and does Pilates.

“I cut the caffeine at two coffees and try to do all that stuff.

“But all of that pales in comparison to what I think is the real secret to health, which is that, wherever I am, I try to be present.”