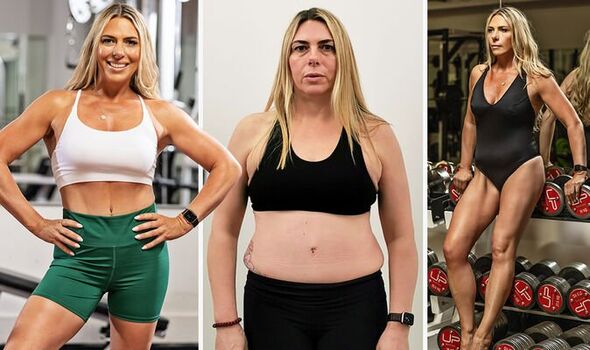 Perimenopausal and menopausal women find it incredibly difficult to lose weight, especially as their bodies try to adapt to the neverending cycle of hormone changes. Express.co.uk spoke to Joanna Blacker, 53, who despite struggling with menopausal symptoms, both emotionally and physically, lost 1.5 stone with the help of Ulitmate Performance.

“I didn’t think about food choices the way I do now and I’d often skip meals during the day then eat a lot of the wrong type of food in the evening, including regular calorie-laden take-aways for convenience,” she explained.

“My physical health was suffering for it and I was trapped in a downward spiral of miserable menopause symptoms, which left me reaching for chocolate and cake in an attempt to feel better, but really it was just making things so much worse.

“At times the menopause symptoms I had felt like torture; brain fog and concentration issues, low mood, excessive weight gain, aching joints, even my skin became really dry and itchy.

“Oddly enough, I didn’t experience the hot flushes that some women do but I had zero energy and no motivation whatsoever. I’d noticeably lost a lot of the strength I’d once had and I felt like I’d lost control of the direction my life was going. I wasn’t in a good place.”

Joanna went on to lose 1.5 stone (10kg) and dropped to a size 10/12, and she said she noticed a change within the first 14 days of taking part in UP’s programme.

“Within the first two weeks I dropped 2kg and the brain fog had begun to lift,” she revealed. “This small but early change switched me on mentally and left me wanting to do more and be more active. 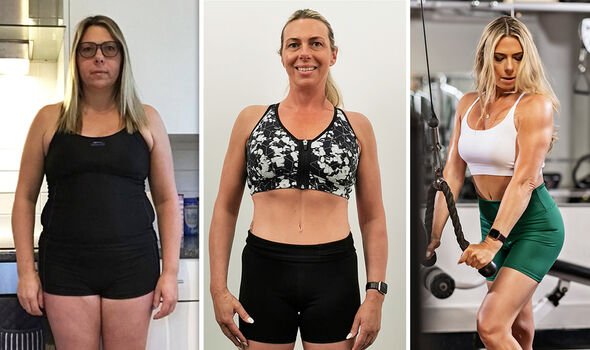 “I trained three days a week in the gym, following two alternating programmes of resistance training, which my personal trainer Mark Bloice at Ultimate Performance Kensington put together. It was a whole body approach that consisted of a series of seven different exercises targeting various muscle groups, using the machines and free weights.

“I began a reduced calorie intake diet of around 1400 calories a day and focused on eating clean, nutritious whole foods like lean meat and fish and a wide selection of fruit and vegetables to hit the protein, carb and fat macros, which would help me feel full and fuel my muscles for all the hard work I was putting in during the gym sessions.

“Initially, we also removed some carbs such as bread, pasta and rice out of my diet and I stopped eating sugary snacks altogether. I thought I’d really miss having chocolate but instead I would make a protein shake with the UP salted caramel whey protein powder and added a scoop of their Chocotrients, nutrient-rich fruit and greens powder, which stopped me craving the chocolate. It’s like having a really thick milkshake and it gave me the ‘sweet fix’ I needed.

“I also increased the daily amount of water I was drinking up to around 3.5L and added some UP supplements to my daily routine, including a multi-vitamin, fish oil and magnesium to support my diet and training,” Joanna commented.

While it’s almost impossible to target a certain area of the body to lose weight from, Joanna was keen to banish the “spare tyre” around her middle as it was the “part she hated the most”.

“When I looked in the mirror, I saw an ageing, tired, overweight woman who had lost her way,” she added. “But not only did I want to shift the fat that was creeping up and up, including on my face, I was also really curious as to what lay beneath the surface and I felt really curious to discover just how physically in shape my body could actually become with the right guidance.

“For someone in her fifties, I knew it wasn’t going to be an easy ride. But I knew I had to take action and once I had signed up, I was fully committed and determined to stick with it and do whatever it took to change into the best possible, healthier version of myself.

“Mark was so supportive, always checking in with me and discussing my progress. He kept me accountable and kept me going when things got tough!”

As for why Joanna choose Ultimate Performance, she said: “I was looking for a high-end personal training experience that would be truly bespoke and one that I felt would make certain I got real with myself in terms of improving my health and physical fitness.

“Their past client successes are seriously awesome, and I also liked that they offered a ‘by-appointment’ approach to training at Kensington, which in terms of practicalities meant the gym is never overcrowded and the weight machines and equipment are readily available to use at all times.”

In terms of menopause, Joanna explained the challenges she faced, and how weight training helped with her symptoms.

“Nothing can truly prepare a woman for menopause, in my opinion,” she said. “I found the symptoms I had really challenging, and completely overwhelming at times, trying to ‘function as usual’ whilst feeling so low and distracted, and walking around on automatic pilot most days. 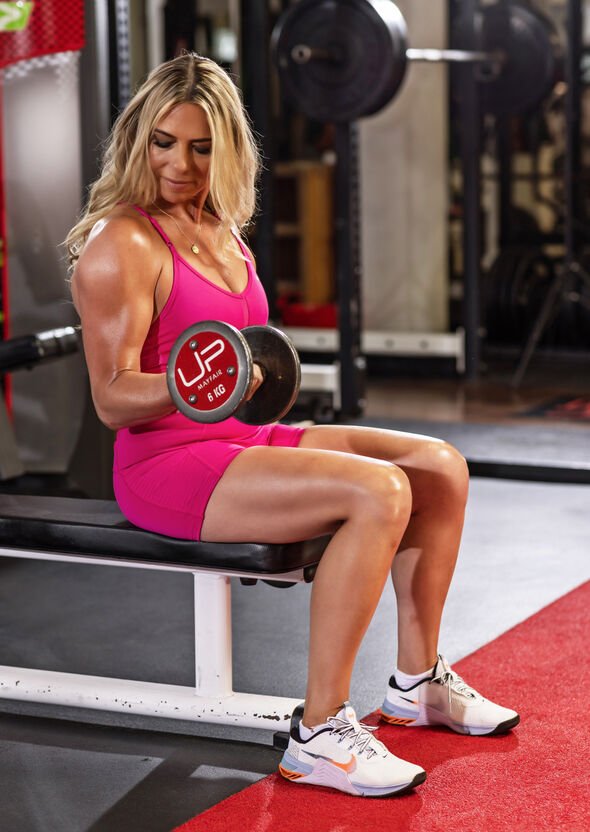 “After chatting through things with my GP and having a 1:1 session with a menopause consultant, I decided not to go down the HRT route and opted instead for a more natural path of lifestyle changes in an attempt to improve things.

“Training with Ultimate Performance, without doubt, released the stuck endorphins in my body, and the more progress I made, the better I felt about myself. I became more resilient and my internal coping mechanisms felt robust again. I saw my motivation increase too and it wasn’t long before I felt a complete change of mindset.

“By weight-training three times a week for an hour each session and progressively upping the amount of weight I was lifting, the leaner and stronger I became. Switching up how I viewed food and becoming better educated on the type and amount of nutrition that I should be consuming to reach my goals made a real difference.”

Now on the other side of her weight loss journey – and menopause – Joanna explained how she has developed a powerful ‘inner beast’ through the process and is inspired to become a personal trainer herself. “My physical results are insane, I hardly recognised myself in my photoshoot pictures!” She remarked. “I’m in the best shape of my life now both physically and mentally, and I feel energised and accomplished. I’m so much stronger now too, and I feel far more resilient than I have for a long time.

“Having lost over a stone and a half, dropped over 15 percent body fat whilst adding nearly 4 percent of lean body mass, makes me feel incredible. 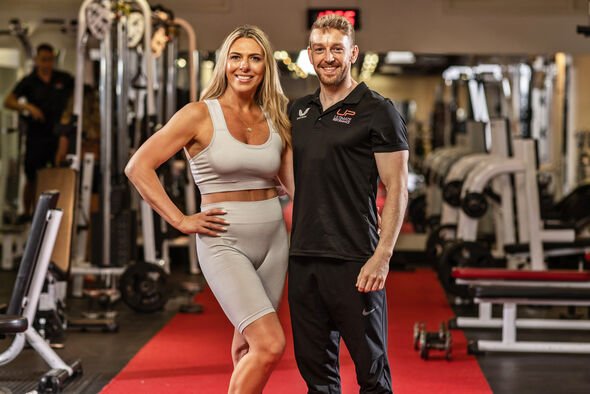 “In terms of my capabilities, I’ve always believed I’ve had an ‘inner-beast’ hidden away inside me but I never ever thought, at the age of 53, that I’d be capable of lifting the sort of weight I can now. I’m bench pressing 40kg for 10 reps, hack squatting 110kg for 14 reps and can deadlift 60kg for 12 reps. I’m stunned when I think about it but I feel really proud of myself for achieving what I have.

“I really think there’s an inner-beast in all of us – we just have to believe in ourselves and have the desire to release it.

“Mark has not only empowered me to build my physical and mental self but he has also inspired me to enter the fitness world and become a Personal Trainer myself. I’ve been studying alongside my transformation journey at UP and I have just become qualified! I’m aiming to put my newly gained skills and knowledge to use helping others to change their lives through fitness and who knows, I might even become a future trainer at Ultimate Performance!”

Joanna also gave some advice for anyone else who finds themselves in the same situation she was: “Health is wealth. Being active at any age is important, but as we get older, retaining and increasing muscle mass is even more essential yet much harder to achieve than it was when we were younger.

“For women, especially those approaching or going through menopause, nutrition and exercising for stronger bones and muscles is particularly important and increasing muscle mass should be one of the primary goals. The more muscle you have, the more calories you’ll burn at rest.

“Whatever shape you are in now, it’s never too late to begin making positive changes to your health and fitness, and when you walk through the doors at Ultimate Performance, you’re in no way alone. You’ll find yourself amongst friendly, highly professional personal trainers and other like-minded people on a similar transformation journey to your own. All you need to do is take the first step.”