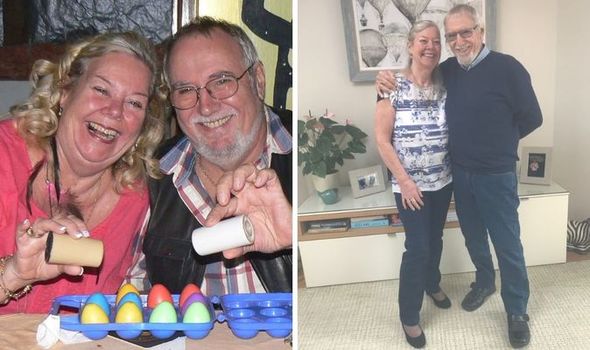 Ann and Richard, who are retired, lost the equivalent of a whole person’s body weight between them in just five months thanks to the DA Group healthy eating diet plan. Inspired by their daughter’s five stone weight loss, the couple decided to try the same plan.

The DA Group Diet was created by family team Emma and Tony Scrivener, their daughter Katie Thomas and her husband, who had lost a whopping 15 stone between them.

After realising that they needed to change their lifestyle and regain their health, Ann and Richard opted to follow the plan.

The couple’s initial weight gain was down to lockdown and developed unhealthy eating habits on regular holidays in Goa.

Ann said: “When we’re there we never eat in, we’re always eating out and socialising.

“We had been trying to lose a bit of weight but not very seriously and then when we were back home in the UK and COVID-19 had broken out, we sort of said, ‘to hell with it, we’re going to eat what we like’.

“During the first lockdown we ate and drank everything in sight, things we love and don’t get in India, like blueberry muffins and homemade bread. We also like our glasses of wine, so of course, we put on even more weight.”

Ann explained that they both have underlying health issues and knew that they needed to shift some weight in order to be healthier.

After six months of “pretending to be dieting”, the couple asked their daughter for more information about the plan.

Ann added: “We’d looked at other diets, but they weren’t for us. The DA plan just seemed easier to follow and easier to get on with.

“We could enjoy all sorts of food on it – it was very much our type of food – and we felt it would keep us on the straight and narrow, for example by addressing portion control. We decided we’d give it a try.”

The couple started the plan back in August last year with a target of a stone weight loss each.

Ann said: “We lost our stone, so we set another target, and it went on like that. We’d lost the majority of our weight by Christmas. We had our treats for Christmas and got back onto DA in the New Year, setting another target for the end of January.

“We never ever, ever dreamt in a million years we would lose as much as we have.”

The couple have developed healthier eating habits and have lost a huge amount of weight between them.

Ann was 13 stone 5lbs at the start of the plan and by the end, weighed nine stone 2lbs.

Richard weighed 16 stone 4lbs at the beginning of his journey and his finishing weight was 11 stone.

Ann said: “We actually eat more now than we ever ate before. We didn’t use to eat breakfast, I have diverticular disease and I would struggle to eat anything before midday.

“Now our favourite breakfast is overnight oats with fruit in it. We also weren’t very good at eating lunch, we would eat a snack of some sort at three or four in the afternoon, and then eat one big meal in the evening.

“Now we eat far more balanced food throughout the day. We’ve found it easy to stick to and we’re never hungry. We’re now happy to keep eating the DA way.

“We’ll sometimes have treats such as a few pints of beer or a few glasses of wine, but we don’t do it every day anymore.”

The couple now mix wine with soda water as well as replacing some of the meat they used to eat with fish.

Since losing weight, the couple’s health conditions have also improved.

Ann said: “I’ve cut down on dairy and red meat and it’s really helped. Now the only time I suffer is if I over indulge and don’t follow the DA plan.”

Richard added: “Before the diet, I was struggling to go upstairs. I was really doddery. When you consider that I was carrying an extra third of my body – the equivalent of going upstairs carrying my grandson – you suddenly realise what a liability it is to be carrying that around with you.