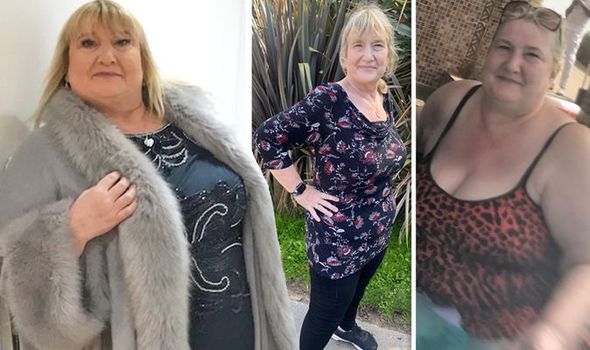 For many, the last 18 months have resulted in the numbers on the weighing scales getting higher and higher. But for Michaela, 54 from London, she did not let the coronavirus pandemic and the three lockdowns stop her determination to lose weight. Weighing in at 25 stone and 12 pounds, Michaela embarked on a life-changing journey at the beginning of 2020 and since then, she has lost a staggering 10 stone by exercise and diet alone. But with Rheumatoid Arthritis, Michaela had to be mindful about what activities she was doing and what she was eating. Luckily, she discovered Lets Move with Leon from Versus Arthritis.

Speaking about her weight, Michaela said: “I have always been overweight even though I ate healthily, but by 2018 I was morbidly obese at 25 stone 12 pounds, and I am five foot five inches.

“I had put on a lot of weight mainly due to drinking alcohol to ease the pain caused by my arthritis.

“Doctors always told me to lose weight because of arthritis but I always felt like I was being fobbed off,” she continued. “However, after discovering weight loss, physiotherapy and exercise, and understanding how important it is for helping with arthritis pain, it is has been key to my success.

“In two years, I have lost over 10 stone and I haven’t finished yet.”

“In 2008, I went on holiday to Spain, and I fell over,” she explained. “Both my knees were very painful but back home in the UK the doctor said to lose weight and I would be okay.

“I had an x-ray but when I phoned for the results, I was told by the receptionist there was nothing wrong.

“I continued to be in a lot of pain,” Michaela said.

“I started to self-medicate with alcohol to get rid of the pain – eventually drinking half a bottle of spirits per day along with over-the-counter painkillers.

“I went back to the doctor and was told by 2014 that I did have arthritis, in fact, it was so bad that unless I lost weight I would be in a wheelchair as my knees were almost bone grinding against bone.

“I began steroid injects to ease the pain, I also had heart issues by this time too,” she continued.

“I needed to carry on working but it became very tough.

“In 2018 I went on holiday but needed premium seats as I was too large to fit in economy. I thought what am I doing to myself?

“The pain of arthritis was so bad which was now in many joints throughout my body, I couldn’t kneel down, do housework, get in the shower and my husband needed to help me do everyday things,” Michaela added.

“In 2019, I had a procedure to put my heart back into its natural rhythm and I was told that had to lose weight in to order to be accepted for knee replacement surgery.

“I was put on medication that meant I had to stop drinking and the steroid injections that I had taken for all this time were no longer effective. I was in a really bad place.”

“I began to see a physio and he really showed me how vital exercise was. I began swimming and aquafit; everyone knew me in the classes as it was so painful for me, and it took me several minutes to walk from the pool wall to the water’s edge because of the pain.

“Swimming and aqua fit was really life-changing and I went regularly. I quickly lost two and a half stone.

“I was devastated when the first lockdown happened and they shut the pools, but I was determined to carry on and bought an exercise bike. It sounds crazy as I could barely walk but I could manage to cycle,” she remarked.

“I continued to lose weight even though lockdown was horrific as many of our friends and family got Covid and I did so too in November 2020.

“From there things deteriorated fast I had a severe flare up of Rheumatoid arthritis which I had never had before Covid and it was so bad that I was bed bound and couldn’t even move the bed covers I couldn’t do anything for myself.

“In January 2021 I found out about Let’s Move with Leon – an online exercise programme from Versus Arthritis, it was incredible even though I could hardly move I soldiered on daily,” Michaela commented. “The exercises are especially done for people living with arthritis.

“I joined their Facebook group and posted about my weight loss and surgery I would receive so many comments from people wishing me well and it was very motivating.

“Every day my husband and I would do Let’s Move – although not hugely overweight he even lost weight too.

“I began to be able to do things that I hadn’t been able to for ages I still couldn’t walk but I was able to at least do some basic tasks because of the programme.

“I continued the exercises and a healthy diet that has no sugar or foods that make my arthritis worse,” she revealed.

“I was able to have knee replacement surgery which I had to pay for as the NHS waiting lists are so long.

“I am currently waiting for the second surgery, but this only spurs me on to lose more weight as the lighter I am the better it is for recovery.”

As for her Rheumatoid Arthritis, Michaela said: “[It is] still very painful and I cant walk very far on my left leg but I have high hopes for the future and know that with careful diet and exercise I can manage the pain.

“Recently when I visited my doctor who had cancelled surgery because he thought I was still the same weight, he could not believe how much weight I had lost, my doctor said I’d never do this without bariatric surgery.

“I just want to lose a few stone more – I am literally half the women I was and I feel so much better for it the exercise really helps with pain management and has helped with recovery from the operation,” she concluded.

Exercise can be very beneficial for people with arthritis.

Staying active is one of the best ways to reduce the impact of arthritis.

Let’s Move with Leon is a new free online programme designed to help people with arthritis exercise at home.

It can be accessed through the Versus Arthritis website and is presented by fitness expert Leon Wormley who specialises in working with people with arthritis and related conditions.

Classes can be done at home and no special gear or equipment is needed to take part.

Versus Arthritis also has an Impossible to Ignore campaign

A record-breaking 650,000 people are waiting for trauma and orthopaedic treatment in England, the vast majority requiring hip or knee replacements due to arthritis.

People with arthritis can’t ignore their pain while they for surgery.

Versus Arthritis Impossible to Ignore campaign aims to make sure the Government doesn’t, either.

Thousands of people on the waiting list have been left without support and are struggling physically, emotionally and financially. Their lives are on hold.

Versus Arthritis is calling on people to contact their MPs, to ensure an urgent package of support is available to everyone waiting for joint replacement surgery, including pain management and financial advice secure government plans for how the funding will address the backlog in treatment and prioritise bringing down joint replacement surgery waiting time.

For information and support, including our free online exercise programme Lets Move with Leon visit www.versusarthritis.org.uk.

David Ginola weight loss: How ex-footballer keeps off the weight at 54